I  got to sit down with Nomazizi, South Africa’s fast-rising commercial model and influencer. She is a graduate of Duke University in the USA and the daughter of Mandisa Muriel Lindelwa Maya, the President of the Supreme Court of Appeal in South Africa. She was appointed by former President Jacob Zuma. Maya is the first woman to hold the office since the establishment of the court in 1910; basically, she made history

Despite the modeling industry being a tumultuous world, only courteous to the Gigi Hadids of this world, she is not holding back…she does what she is passionate about.

According to Tracy Mutinda, an editor at The Star newspaper in Kenya, your profession shouldn’t limit your passion.

“Whether you are a lawyer or a pilot, that shouldn’t tie you down from pursuing whatever you love. You can be a model or video vixen and don’t mind about being judged by people. Just do what you love. If you can multi-task, do it,” she opines.

In our conversation, Nomazeze talks about how she rose to be a big social media influencer in the SA.

BMRA: What inspired you to start your natural hair journey, and tell us your go-to hair products at the moment?

Nomazizi: I’ve always had hair that was at least shoulder length, but as I got older I realized that it seldom got longer and often returned to that length, so I started doing some research on how to grow my hair longer and that’s how I stumbled onto the natural hair movement. Right now my hair is in box braids so mostly I’m using my favorite braid spray from Jabu Stone as well as castor oil for my edges. 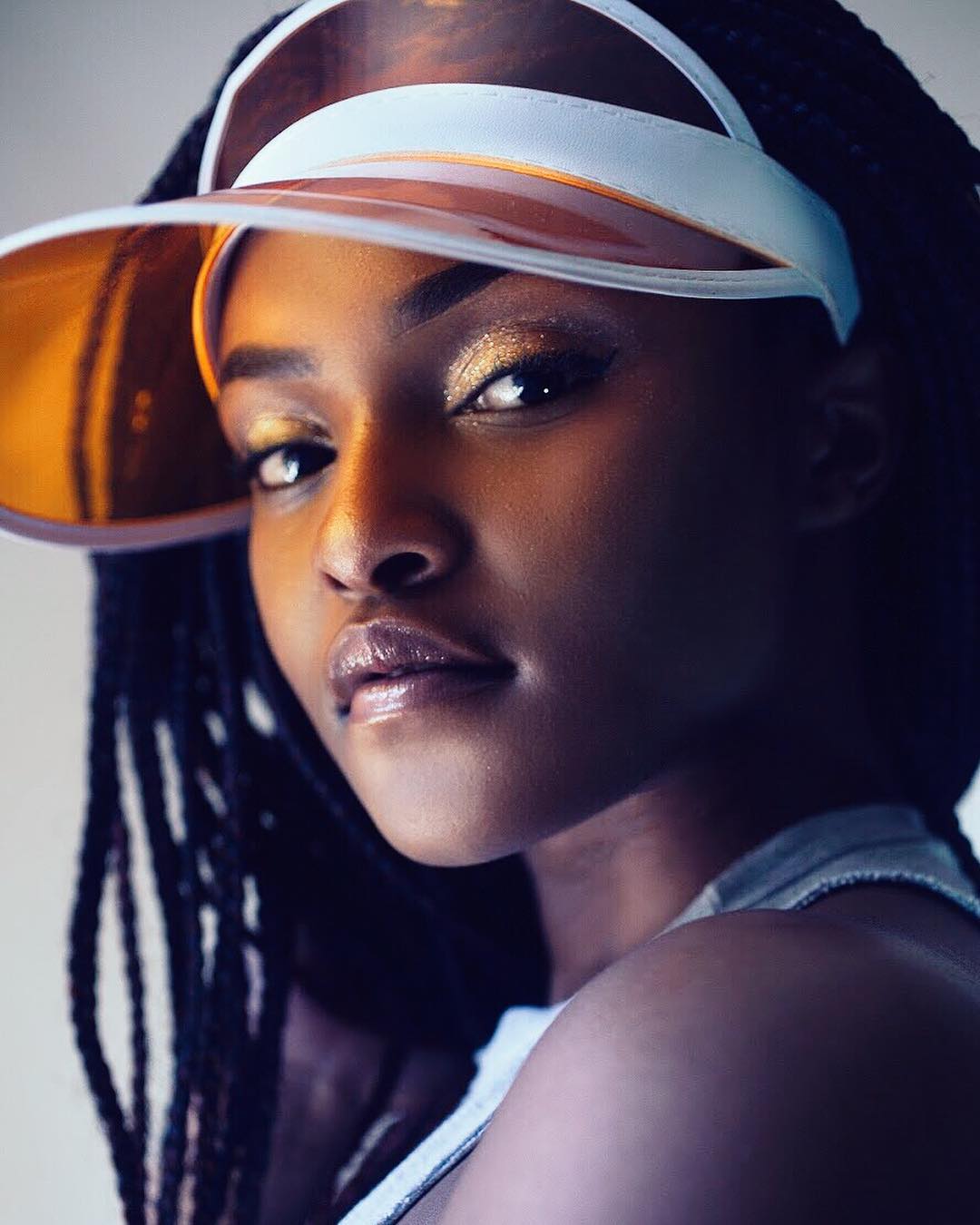 B: How did you feel when you got featured on a Kenyan magazine (Pulse) yet you’re based in South Africa?

N: I felt great! But seriously, it’s an honor and I’m grateful for the appreciation.

B: Do you intend to pursue tennis professionally or is it just a hobby?

B: I understand that you visited Duke University sometime back, what’s the South African thing you encountered in the USA?

N: I was studying at Duke. It’s in North Carolina so the community isn’t quite as diverse or cosmopolitan as, for example, a place like New York or LA. I didn’t really come across anything that was distinctly South African except for this time I heard one of my American friends playing a song by Black Coffee. That was a surprise so far from home.

B: Why did you choose to study law? Did your mother influence your decision?

N: I studied law because at school I was pretty good at debating, English was my strongest subject and I was an avid reader and writer. My first choice was journalism, but I decided that my personality was better suited to the law. I wouldn’t say that my mom really influenced my decision, but she definitely did expose me to what a life in law looked like.

B: What your opinion about the state of fashion modeling in Africa in regards to Instagram influencers?

N: I think it’s pretty exciting. Everyone seems to be having fun and trying new things, which is what it’s all about. 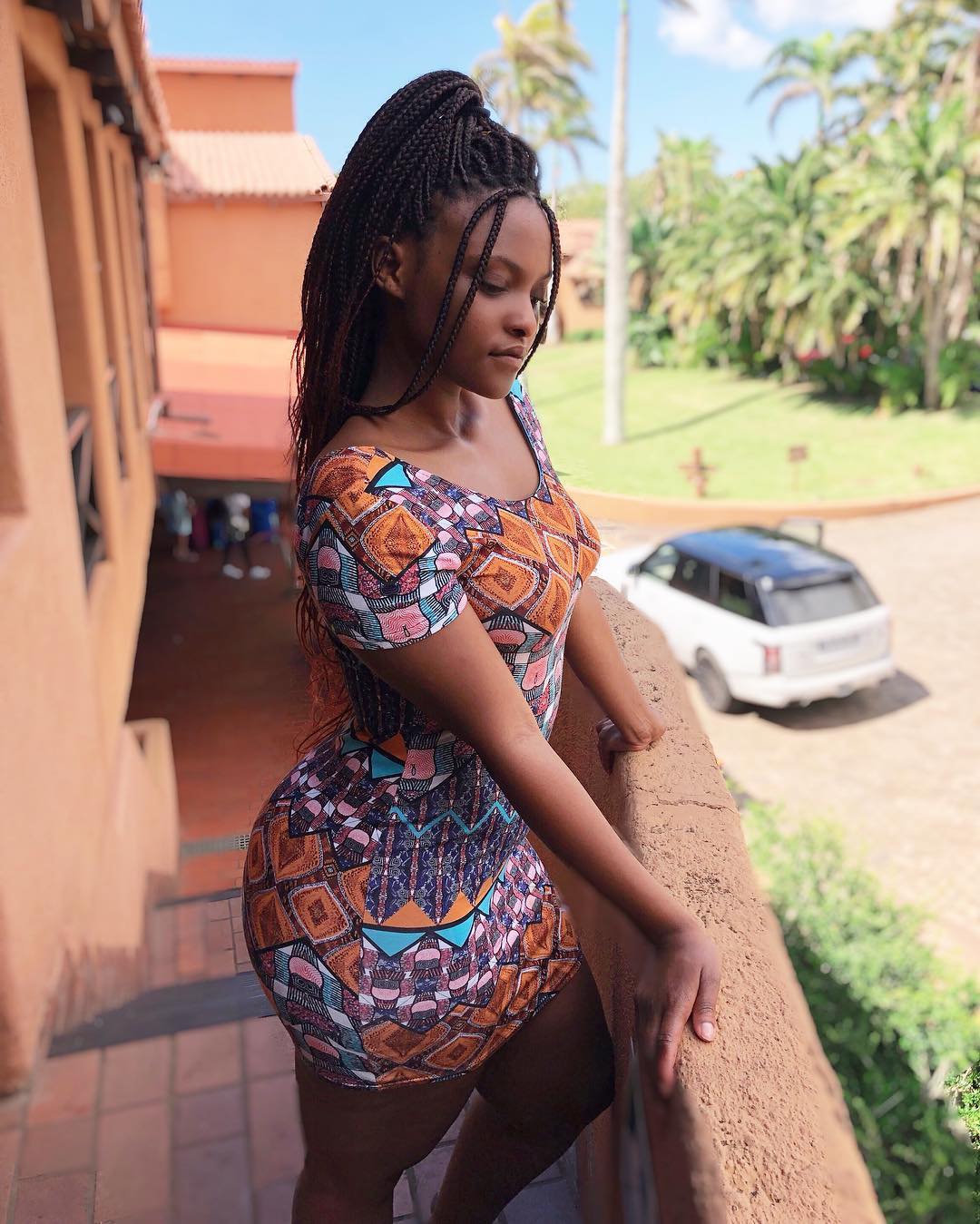 B: What’s the best advice your mother has ever given you?

N: To hang in there because all rough patches eventually pass. When you’re an ambitious person, you tend to encounter a lot of rough patches and it’s always nice to think back to that reminder.

B: How do you feel about the South Africa Court president being a woman, especially since the court was established in 1910?

N: I feel incredibly proud, not just because a black woman has finally penetrated such an important court, but because it’s my mom. It’s also exciting because it inspires other women in the legal profession and shows us that we can achieve anything with hard work.

B: Have you ever been cyber bullied because of being a “thick” model? How do you handle such challenges?

N: Hahaha! No I don’t recall being cyber bullied for being thick. I generally delete all negative comments immediately and don’t let them get to me. After all, I’m an ordinary person and I don’t try to be perfect. 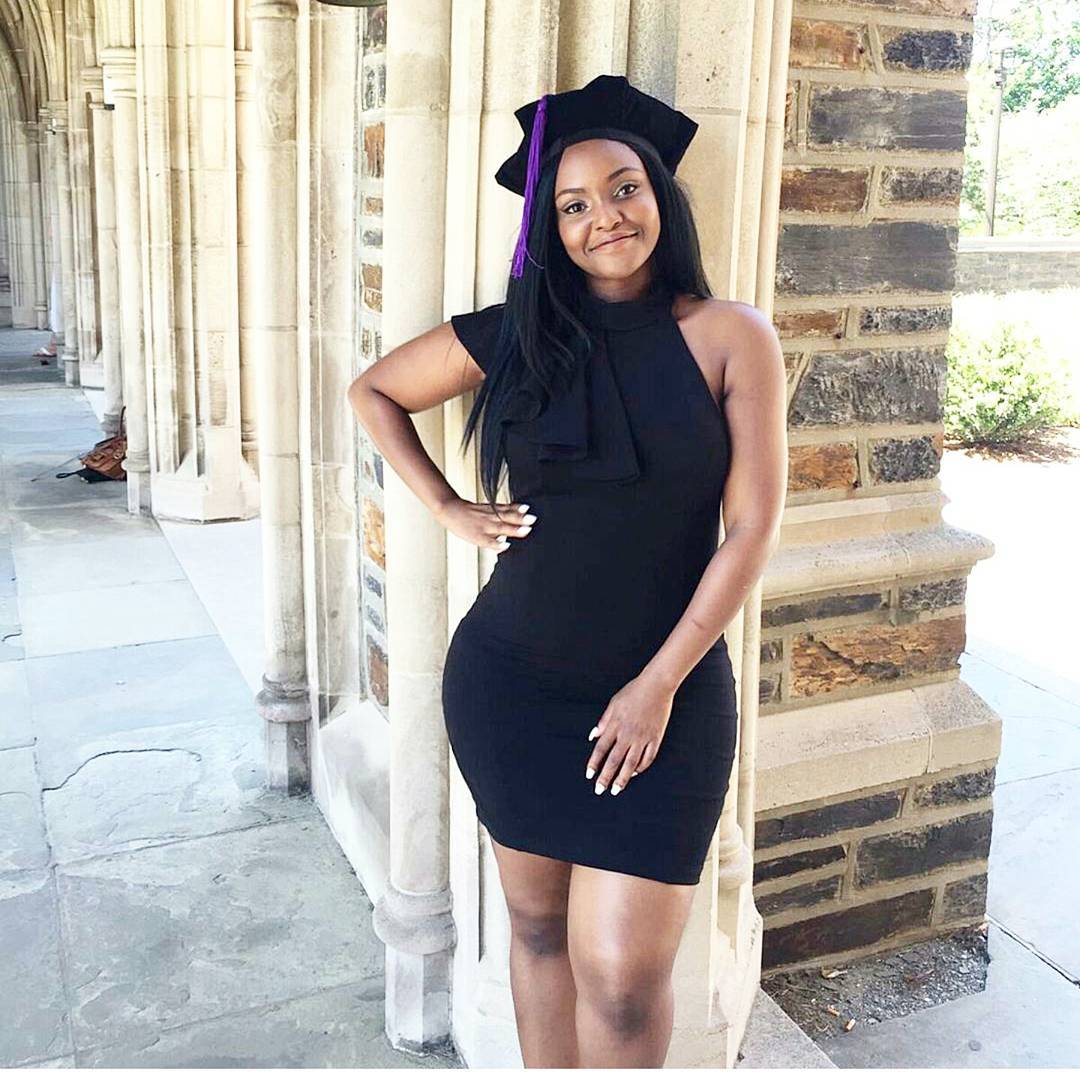 B: Most ladies who follow you on social media love your outfit choices and how you piece everything together; tell us your secret to shopping. Are you more of an online shopper or you prefer physical shopping?

N: I looooove online shopping! I find that physical shopping is too time consuming and I don’t enjoy going to the mall, looking at and trying on clothes and then standing in line to buy them. I often know exactly what I’m looking for, so it’s convenient to type that into a search bar on websites. But the convenience can easily lead to overspending, I’ve probably spent hundreds of thousands on clothes in the past year.

B: What’s your diet like? How do you maintain your body?

N: I really only diet when I’m working because it’s easier to stick to a routine during the day. I’ll usually snack throughout the day on fruit, nuts, protein shakes. Then at night I’ll eat whatever I want, like meat and veggies and some sort of starch. Often I’m too tired though and will probably just get Nandos. I do try to get to the gym at least 4-5 times a week and mostly do cardio, and luckily my body responds quite well to minimal exercise. 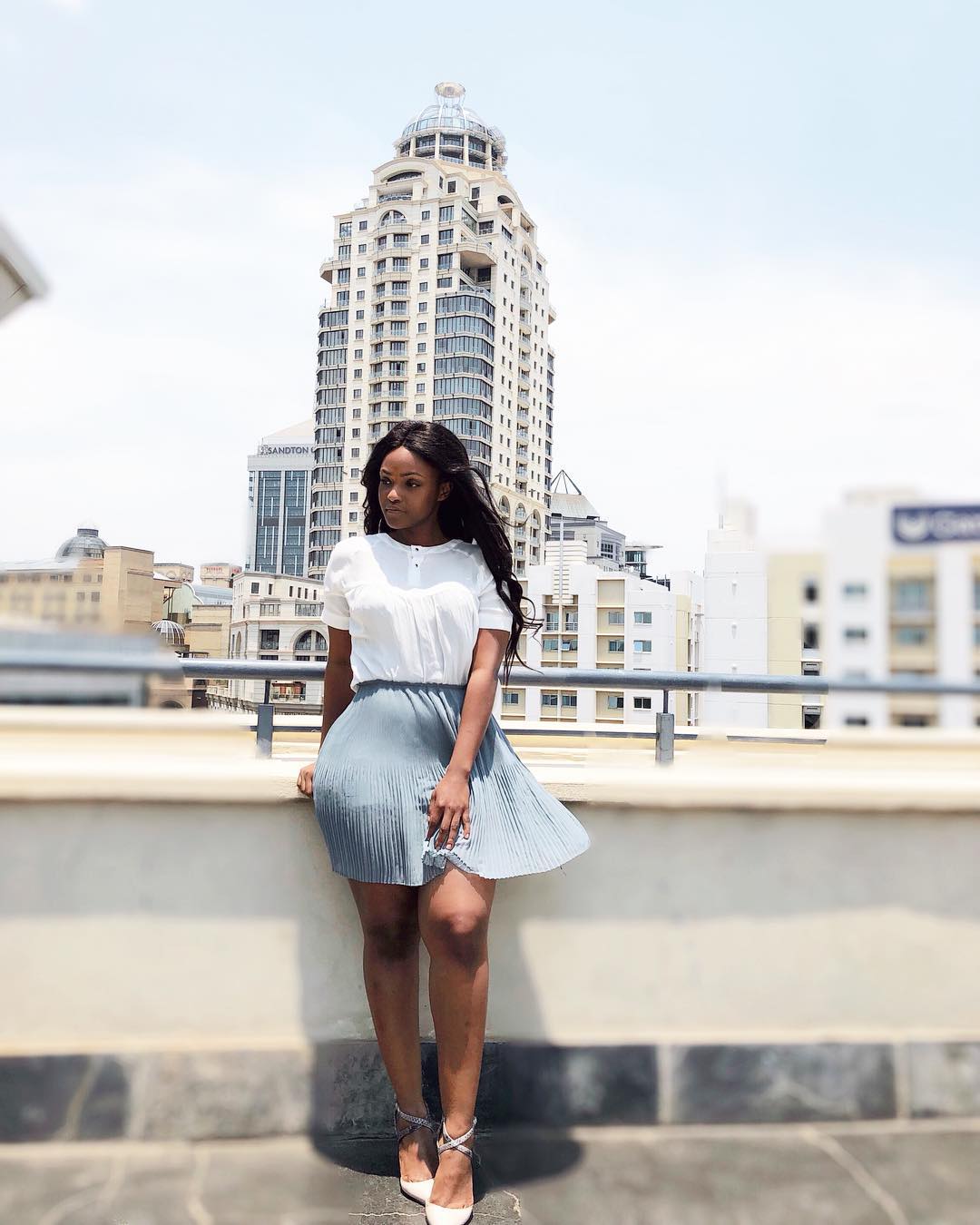 B: If you were to go on vacation on a remote island with an African celebrity, who would it be and why?

N: That’s a tough one. Probably Siphokazi because she has such an amazing voice (this is assuming she’d be willing to sing every day!). Also, she’s Xhosa-speaking like me so it would be nice to have someone with whom to converse in my mother tongue. Or maybe Sindiwe Magona, because she’s such an amazing writer. I’d love to pick her brain.

B: What’s your long term career plan…do you plan to take your modeling to another level or you would love to fully concentrate with Law?

N: I don’t know yet. That’s what’s so great about living in this time (anything is possible). I guess we’ll have to wait and see.

B: What’s the best advice you would tell to your younger sibling?

N: I’d tell them to say yes to new opportunities and experiences. Often as young people we’re in such a rush to “find ourselves” that we miss out on a lot of enriching experiences that take us out of our comfort zones, simply because we think they’re not “our thing” or that we won’t be good at them. 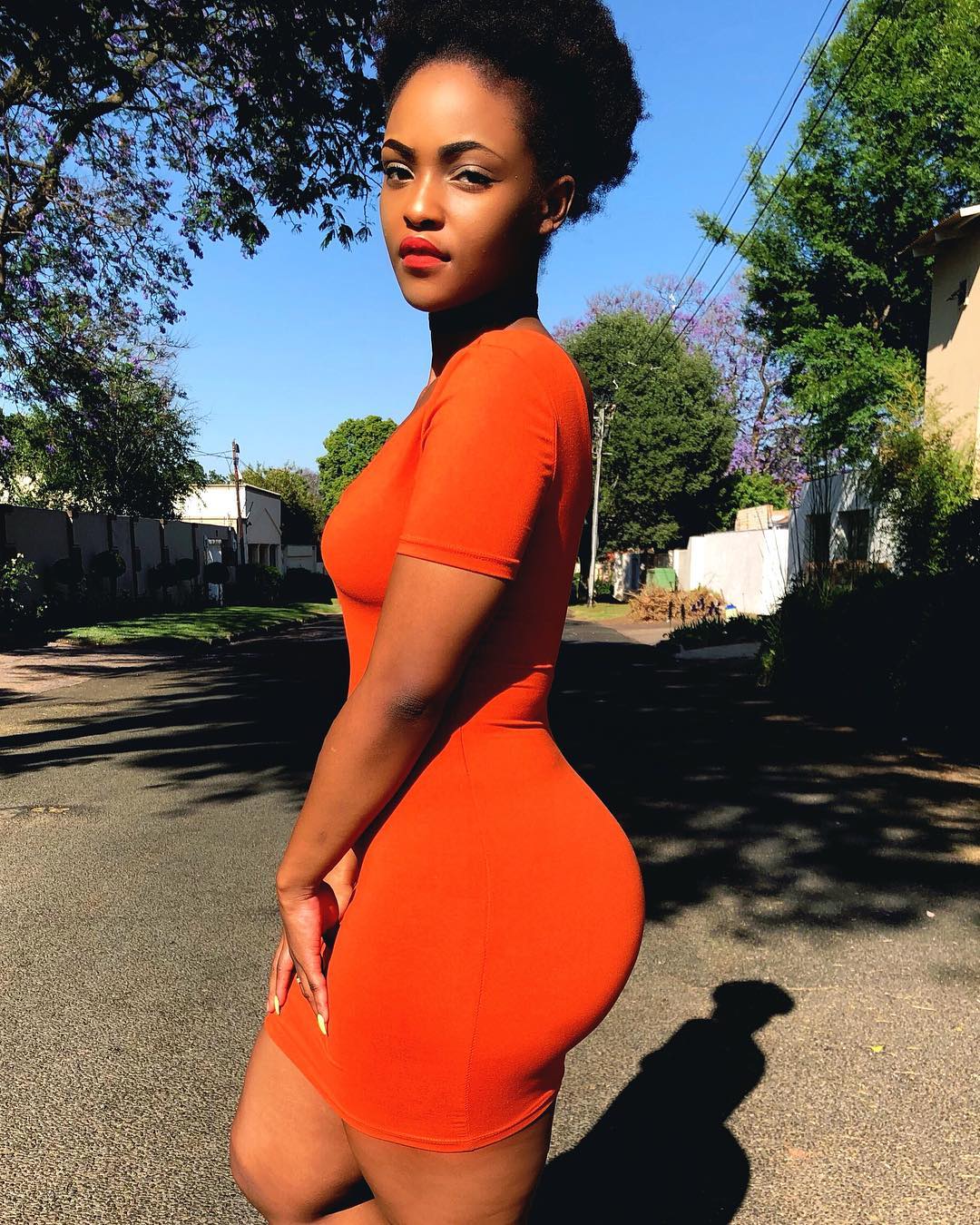 B: If you were to be in a movie with your all time woman crush, who would it be and why?

B: When was the last time you cried and why?

N: I cried at the airport in 2016 when I moved out of the country for a year. Goodbyes are tough.

B: Finally, what’s the best thing that a fan has ever done to you?

N: My followers are generally friendly and supportive. I wouldn’t say any one did something in particular but they do send kind messages which I appreciate.